The US South Korea trade pact that was agreed in 2012 is to be discussed after President Donald Trump threatened to terminate it. According to Donald Trump, the agreement has to be renegotiated or it will be terminated. This goes along with the president’s policy of terminating agreed trade agreements unless they are renegotiated to provide the best terms for the USA. 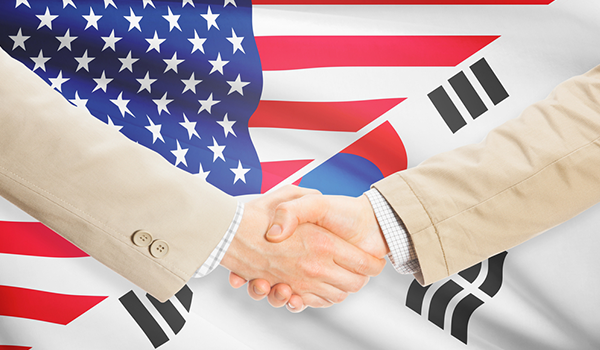 South Korea agreed to this renegotiation on Wednesday. According to Robert Lighthizer, the US trade representative, the talks would focus on “outstanding implementation issues as well as to engage soon on amendments that will lead to fair, reciprocal trade.” This appears to be a logical step to the US in view of its perceived trade deficit with South Korea.

It is said that since the trade pact was implemented in 2012, the goods trade deficit of the US with South Korea was $27.6 billion last year – more than twice that in 2012. However, the trade deficit dropped to £13.1 billion in July this year, compared to $18.8 billion for July 2016. These figures were provided by the US Census Bureau. So the deficit seems to be dropping.

US Trade Deficit With NAFTA

In August, there was a difference of opinion on how the trade agreement should be changed. This was instigated when Robert Lighthizer demanded that the agreement be changed to reduce the US trade deficit. His current statements appear to be putting more pressure on South Korea to meet US demands.

There is to be the third round of talks between the two countries. Lighthizer is not just focusing on South Korean trade, but also on that between the US and Canada and Mexico. Donald Trump is unhappy with the terms of the North American Free Trade Agreement (NAFTA). He wants also wants NAFTA to be rewritten to suit American needs more.

Why Does the US Have Trade Deficits?

So what’s next? Time will tell, but this president appears to be unhappy with trade agreements that do not benefit the US more than the other parties to them. He is correct that the trade agreements should benefit all members of them. However, what should also be considered is what South Korea, Canada, and Mexico can provide the US that it cannot produce itself.

Why does the US have trade deficits? Answer that question, and then perhaps the US may be less reliant on exports from other countries. The US South Korea trade pact may be more important to the USA than many understand.